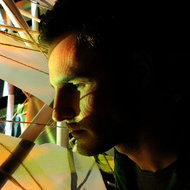 Fusing electro pop, trip hop, dubstep, hip hop, industrial and electronica, Boyfriend Academy represents an electronic music aesthetic that’s sexy and sophisticated. Boyfriend Academy is the creation of Tony Smith, a multi-talented producer, composer and songwriter who originally made his way from Louisville to San Jose a decade ago as a software engineer.

“I’ve always been passionate about music and technology,” says Smith. “I love making electronics sing and vibrate. The explosion of electronic music lately has been incredibly exciting.”

Working on projects across the country including Los Angeles, New York, San Francisco and beyond, Boyfriend Academy has composed and produced original music for short films, fashion shows, modern dance performances, art shows, online media, burlesque shows, television commercials and special events. Last year, Boyfriend Academy collaborated with San Jose choreographer Nhan Ho on two new pieces for the Nhan Ho Project premiere. “Composing for film or dance is an entirely different process from songwriting. The visuals and the movement inspire me and challenge me to go outside my comfort zone.”

What sets Boyfriend Academy apart in the electronic music world is the broad palette of influences Smith draws upon. “Jazz, soul, hardcore, metal, rap, whatever. According to my iPod and my vinyl collection, I’m unequivocally genre-agnostic. I love good music and pure talent.” Over the past few months, Boyfriend Academy has remixed an eclectic group of artists, from Rufus Wainwright to Theophilus London. “My favorite so far was the Janis Joplin remix. Working with that a cappella track gave me the opportunity to really hear and appreciate the intricacies of her vocal delivery. I tried my best to do her justice.”

“As much as I love synthesizers and drum machines and all things tech, when it’s time to get some real songwriting done, I usually turn to the piano or guitar. It keeps me musically grounded, and it helps with my electric bill.”