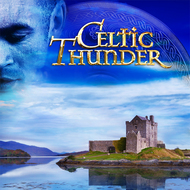 Celtic Thunder has also been hailed as BILLBOARD’s Top World Music Artist, along with Top World Music Imprint and Top World Album of in 2008, 2009, 2011 and 2015. The Celtic Thunder official YouTube channel, “Thunder Tube” has received over seventy seven million views since its inception in 2008. Their monthly newsletter The Celtic Times had a readership of 1.2 million and they have over 290,000 followers on Facebook.

In 2007 producer Sharon Browne filmed the first ever Celtic Thunder show at the Helix in Dublin, Ireland. The concept was to feature a group of men from Ireland and Scotland, who range in age from 21 to 42, and feature songs that celebrate a common Celtic heritage.

The resulting show included an eclectic mix of songs ranging from the traditional to international hits and some original pieces along the way. The current cast of Celtic Thunder is made up of diverse performers, Keith Harkin, Ryan Kelly, Neil Byrne and Emmet Cahill, and special guest artist Damian McGinty. Damian was one of the original members of Celtic Thunder who left the show in 2011 to compete in the first season of the hit show “The Glee Project”, which he subsequently won. He then joined the cast of the hit show Glee and has been pursuing his solo career ever since.

The members of Celtic Thunder are each a powerhouse in both their solo and ensemble songs. Ably backed by the dynamic Celtic Thunder Band, their shows are known for the use of dramatic effects of lighting and choreography as well as a stage set resembling an ancient stone pathway suggestive of those referenced in Celtic lore.

The first Celtic Thunder CD/DVD was released in March 2008 and was simply called Celtic Thunder – The Show. A full US and Canada tour followed in the fall of that year, along with a second CD from the Show called “Act II”. In 2009 Celtic Thunder released their second DVD third CD “Take Me Home.” This was followed by “It’s Entertainment” in 2010, which paid homage to US pop culture. 3 subsequent releases “Heritage”, “Voyage” and “New Voyage” firmly returned the show to its Celtic roots, stocked full of Irish and Scottish traditional and contemporary songs. The first Celtic Thunder Christmas CD and DVD were also released in October 2010.

Two more releases followed in 2011 for Celtic Thunder, Heritage in Feb ’11 and Storm, their first theatrical production in August 2011. Celtic Thunder also took the Heritage show on tour in the US that year. February 2013 saw the show return to the Helix in Dublin to film their 9th DVD and 10th CD entitled “Mythology” which presented a perfect blend of entertainment, ideology and Gaelic spirituality, providing a modern twist on the old Celtic storytelling tradition.

In Fall 2014 Celtic Thunder released their 11th CD “Holiday Symphony” an eclecic selection of Christmas standards from around the world and delivered with Celtic Thunder’s signature big production sound and backed by a 90-piece orchestra. 2015 saw the Very Best Of Celtic Thunder release on CD and DVD, offering a compilation of their best loved songs and fan favorites and followed up with a North America “Very Best of Tour” which took place from February to April 2015 covering 45 cities over a 9 week spell.

In 2014 Celtic Thunder transitioned to their new home at Sony Records’ Legacy label and their first release on Legacy was Holiday Symphony, followed by The Very Best of Celtic Thunder. The entire back catalog moved to Sony and was re-released in October 2015.

In March 2015 Celtic Thunder filmed their latest show entitled “Legacy” at the Casino Rama in Canada. Legacy Volume I is due to be released on CD, DVD, Blu-Ray and limited edition Vinyl on February 26th 2016, with volume II following later in the year. On the back of the Legacy release Celtic Thunder brought the show on a 16-city tour of Australia in May 2016 and a 75-city North American tour in the Fall of 2016.

In 2017 Celtic Thunder released the Inspirational CD followed by CTX in 2018 to celebrate their 10th year anniversary. This was followed up by a 75 date tour of North America.

By the end of 2019 Celtic Thunder will have toured the US and Canada, coast to coast, eleven times, Australia four times performing nearly 800 shows to date to well over a million fans. Celtic Thunder has also undertaken 2 Entertainment Cruises in the Caribbean, each one transporting over 4,000 fans on a 4-day musical extravaganza.