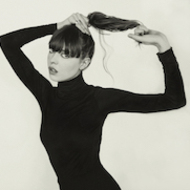 Diane Birch’s latest album, the self-produced Nous, is her bravest and most independent work to date. Written and recorded mostly in Berlin, Nous draws on musical influences as varied and rich as Birch’s own international upbringing—from her… (read more)

Diane Birch’s latest album, the self-produced Nous, is her bravest and most independent work to date. Written and recorded mostly in Berlin, Nous draws on musical influences as varied and rich as Birch’s own international upbringing—from her childhood as a preacher’s daughter in Zimbabwe and South Africa, to her wedding dress and black-lipstick days as a Goth teen in Portland, to her late teens in L.A. where she paid her musical dues playing piano and singing covers in fancy hotels. She was discovered on MySpace in 2007, and shortly thereafter moved to London and New York to begin her recording career.
In Nous, Birch channels Ambrosian hymns, moody soul, Debussy and RnB, all brought together with an unflagging attention to classic pop songwriting and the intricate possibilities of the piano. Lyrically, Nous explores questions of love, power, gender, and loss, along with Birch’s recurring odes to the concept of a "higher self.” Indeed, the album’s title doesn’t only mean “we” in French. Nous is an ancient Greek term for “awareness.”
Working primarily alone with her piano, Birch has crafted a sonic landscape both timeless and contemporary. Saxophone by Stuart Matthewman of Sade and drums by Max Weissenfeldt of Polyversal Souls contribute to Nous’s layered, intelligent instrumentation, fusing touches of her live-band sound from previous albums with delicate forays into programming, sampling, and electronic production.
With two previous critically acclaimed albums on her discography (Bible Belt and Speak A Little Louder), Birch has earned herself a dedicated fan base across the globe, together with respect from a wide range of musicians from Prince, Mark Ronson, Daryl Hall, Dave Stewart, Questlove, Elvis Costello and Stevie Wonder.
Nous marks a turning point for Diane Birch, who has both reclaimed creative control of her music and expanded her territory, crafting an album of intimate resonance and deep, reaching, soul.
Notable Reviews (Excerpts):
“[Nous is] her most compelling and modern work yet, finding a niche somewhere between Sade and Stevie Nicks. With it, Birch's prowess and originality finally come through loud and clear.”
- Village Voice, October 2016
“In Nous we find the perfect alchemy of a subliminal jazz and penetrating sacred music; a magic potion that does not fail to surreptitiously take us away from ourselves.”
- Indie Music (France), April 2016
“Diane Birch’s new EP, Nous, documents dreams, disappointments, disillusionment, faith and acceptance, and an awareness not spoken... If Denise Levertov had made music, it would have sounded like this.”
- The Old Grey Cat, June 2016