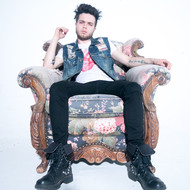 Innocent Tyler is a pop punk band from northwest Arkansas. Shake The Nerves, the 3rd EP recorded with long time friend and Producer Luis Cabezas (The Dollyrots) is set for release October 22nd, 2021 on all platforms. This effort was cut at Harmonic… (read more)

Innocent Tyler is a pop punk band from northwest Arkansas. Shake The Nerves, the 3rd EP recorded with long time friend and Producer Luis Cabezas (The Dollyrots) is set for release October 22nd, 2021 on all platforms. This effort was cut at Harmonic Mermaid Studio in Tampa, Florida and is the culmination of almost a year of writing and refining demos through the Pandemic.

The first two EP’s, Make a Scene (2018) and Pills and Cheeto Dust (2020) were created completely DIY and both received significant Sirius/XM radio play and built a dedicated following of fans both in the US and Abroad. Continuing the DIY approach, Shake the Nerves was funded by Lead Singer/Songwriter Vincent Tyler and the band’s dedicated fans. If you like the fun of Bowling For Soup, the melodic sensibilities of The Dollyrots, and the lighter side of The Bouncing Souls you will love Innocent Tyler.

“When I wrote these songs I wrote with a sense of urgency. It felt like I had to put these words down on paper and into the music. I was on the other side of a bad breakup, and this was me working through that plus a number of other crucial events in my life. These are true stories. I wrote the title track first it really set the tone for the EP. My influences shine through on this record but I feel I’ve really made a sound that’s my own, one that takes the old school elements I grew up with and brings them to the future.”

Vincent Tyler formed Innocent Tyler in Northwest Arkansas in 2016. He realized his dream of becoming a musician at 9 years old when he met Jaret Reddick of Bowling for Soup. “I was the youngest kid at the show by at least a decade, and I knew every word to every song. Jaret took notice and gave me this “fan of the day pack,” which was just some stickers and a beanie, but I was totally blown away!” Vincent saw Jaret on stage that night with his crazy hair and guitar, and at that moment he knew that was what he wanted to do.

Years later Jaret got Vincent the gig as lead guitar player in Erik Chandler’s (Bowling For Soup bassist) band. He stayed with Erik for a couple of years, then decided it was time to record all the songs he had been writing, leading to the genesis of Innocent Tyler. “I met Luis Cabezas when I was playing for Erik (I was already a huge Dollyrots fan) and we really clicked. It was one of those times when you knew something great was going to come out of it.”

Shake The Nerves is available everywhere October 22nd. Accompanying the release will be a series of online shows and in-person performances in select US cities.