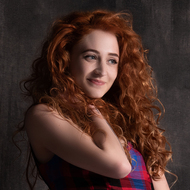 Janet Devlin is a 25-year-old Northern Irish singer-songwriter, who grew up the only girl and youngest of four, outside the village of Gortin in County Tyrone. Fuelled by a love of bands like Foo Fighters and Red Hot Chili Peppers and inspired by… (read more)

Janet Devlin is a 25-year-old Northern Irish singer-songwriter, who grew up the only girl and youngest of four, outside the village of Gortin in County Tyrone. Fuelled by a love of bands like Foo Fighters and Red Hot Chili Peppers and inspired by their song-writing, she taught herself to play instruments by ear and penned her own songs. Her musicality and determination flourished from a young age and she joined YouTube in 2006 at age 12 to push out her music to the public. This gained an unexpected but welcome fan base who were ready to support her in the next stage of her music career. In 2011, she caught the public’s attention on Series 8 of The X Factor, where she consistently received the highest consecutive public vote out of all the contestants and gained a place on the live arena tour.

Janet’s debut, Running With Scissors was released in the UK in June 2014 (reaching number one on the UK Indie Breakers chart) and in North America in Feb 2015. It is full of folk-driven pop songs and heart-touching ballads, which perfectly showcase her unique and enchanting vocals. The majority of the album is written by Janet and was recorded up in a staggering 6 weeks; but hidden around the corner are featured co-writes with Newton Faulkner (‘Creatures Of The Night’ and ‘Hide And Seek’) and Jack Savoretti (‘Delicate’) nestled alongside a surprising and sensitive cover of The Cure’s ‘Friday I’m In Love’ which has racked up over 14.2M streams on Spotify alone. A number of EPs and followed (Duvet Daze, December Daze, Little Lights) and two tracks, ‘Outernet Song’ and ‘I Lied To You’. She enjoyed a regular touring schedule which saw her travel around the UK and Ireland, as well as the East Coast of North America.

A result of the music releases has helped Janet maintain a thriving YouTube presence. She regularly creates video content for over 560,000 subscribers including original music, cover versions, vlogs and poetry, and posts on a variety of subjects including mental health, sexuality and bullying. She has attended numerous Creator Summits across Europe as guest and also a performer / panellist, and was included in the UK Book of YouTube 2018; an industry manual containing the top 100 most influential YouTubers in the country.

On 5th June 2020, Janet Devlin stepped back into the spotlight as her brave and ambitious dual concept album and autobiography were released. They offer an intimate look into a decade of the singer-songwriter’s life; from the years leading up to her appearance on the X Factor, to the present, as well as giving those who struggle with the same mental health issues that Janet has survived, a sense of comfort and hope that they too, shall overcome. The album is fuelled by pop songs that wear not only their hearts, but their scars, on their sleeves: the purest confessions of a young life lived less ordinary, twelve true-to-life tales, each as candid and powerful as the next. Each chapter in the book unlocks the truth behind each song on Confessional; and as Janet says, “The only way out now - is up.”

“Writing the songs for Confessional at the same time as the book has been one of the most challenging things I’ve ever done,” Janet reveals. “There have been many times when I felt I would never be able to finish either of them. So, now that they’re both finished and no longer just ideas that reside in my broken mind, I stare back in wonder. Even I can’t believe what I’ve endured. Whatever compelled me to write the story of the last ten years of my life was also the same power that gave me the confidence to start believing I deserved this second chance. Through everything, I can genuinely say I owe my life to music. And now it’s time to set it free.”

During the writing of Confessional she embarked on a number of new experiences and gained numerous accolades along the way. She made her screen debut for Triskelle Pictures’ indie film Songbird. While writing the script, award-winning screenwriter Tommy Draper was inspired to write the part of Jennifer specifically for her. Janet wrote two original songs for the film, of which ‘Chandeliers’ has gone on to win numerous awards; Original Song, The Midlands Movies Awards 2019; Best Foreign Theme Song, Artemis Women In Action Film Festival 2019, and was nominated for Best Score/Soundtrack, Nexus Film Awards 2019.