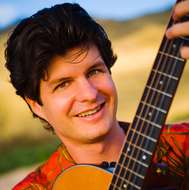 Recognized as one of Hawaii’s most versatile musicians, Grammy Award Nominee Jeff Peterson is at the heart of the Hawaiian music scene today. His passion for the guitar has allowed him to shine as a solo artist and has given him the opportunity to… (read more)

Recognized as one of Hawaii’s most versatile musicians, Grammy Award Nominee Jeff Peterson is at the heart of the Hawaiian music scene today. His passion for the guitar has allowed him to shine as a solo artist and has given him the opportunity to collaborate with a wide variety of artists from Hawaii, across the US, and abroad. His focus on Slack Key guitar, classical, and jazz music has allowed him to develop a unique and transcendent voice on the guitar while being deeply rooted in the traditions of his Hawaiian heritage.

He has contributed to two Grammy Award-winning recordings and has been honored with nine Na Hōkū Hanohano Awards in Hawaii.  His solo CD Maui on My Mind was recognized as the Slack Key Album of the Year and received a Grammy nomination in 2010. His next release featured his songwriting, performing, and producing on Amy Hanaiali`i and Slack Key Masters of Hawaii. The groundbreaking recording features a collaboration between Jeff, Amy Hanaiali`i, Cyril Pahinui, Dennis Kamakahi, Sonny Lim, and Chino Montero. His next release titled Slack Key Travels includes twelve new compositions and new arrangements of classic Hawaiian songs and won the 2014 Hoku Award for Best Slack Key Album. Jeff’s solo album O’ahu won 2 Hōkū Awards in 2016 for Slack Key Album of the Year and instrumental song of the year for the song Old Pali. His latest release Wahi Pana is a full length performance and documentary film and CD soundtrack. Jeff premiered composed and performed the first ever Concerto for Slack Key Guitar and Orchestra in 2016 with the Raleigh Civic Chamber Orchestra. The piece is featured in Wahi Pana, Songs of Place, which is a full length performance and documentary film with a CD soundtrack featuring slack key, classical, jazz, and world music along with background on Jeff’s life, music, travels, and collaborations. Current projects have included an instructional DVD on slack key guitar and the 2018 Na Hōkū Hanohano Instrumental Album of the Year Across the Sea featuring Tsun Hui Hung on erhu and Greg Sardina on steel guitar. Jeff is a 2018 Native Arts & Cultures Foundation Fellow and 2018 First People’s Fund Fellow.

Born on the Island of Maui, Jeff Peterson grew up on the slopes of Haleakala where he was introduced to the rich heritage of Hawaiian music by his father, a paniolo, or Hawaiian cowboy, on the Haleakala Ranch.

As a performer, Jeff has had the honor to work with a wide range of artists and groups including Eric Clapton, James Galway, Brian Stokes Mitchell, Aaron Neville, Boz Scaggs, the Honolulu Symphony, Hawaii Opera Theatre, Keola Beamer, Nathan Aweau, Amy Hanaiali’i, The Matt Catingub Orchestra of Hawaii, jazz bassist Rufus Reid, shakuhachi master Riley Lee, Taiko master Kenny Endo, Classical guitarist Benjamin Verdery, Hindustani Slide guitarist Debashish Bhattacharya, the acclaimed string quartet Ethel, and with many other artists in the fields of Hawaiian, classical, and jazz music. He has four recordings with Riley Lee: “Maui Morning”, “Bamboo Slack Key”, “Haiku”, and “Haleakala”. He also released seven solo guitar recording featuring his slack key artistry, “Oahu”, “Slack Key Travels”, “Maui On My Mind”, “Kahealani”, “Slack Key Jazz”, “The Artistry of Jeff Peterson”, and “Pure Slack Key”. Wayne Harada from the Honolulu Advertiser reacted to hearing the CDs by writing: “Add the Peterson name to the top 10 list of slack key giants”, “His manner is impeccable, his style exquisite: the CD is perfection”, “Brilliant . . . Peterson raises the bar a few notches in both slack key and jazz with this bright and exceptional release”. He is also featured as a performer and arranger on the 2008 and 2009 Grammy Nominated recordings “Aumakua” and “Friends and Family of Hawaii” by Amy Hanaiali’i.

He has traveled to Europe, Asia, Australia, and across the United Sates to perform at a variety of venues from Symphony Space in New York City to the 2010 World Expo in Shanghai, China. In addition to performing, he taught the guitar at the University of Hawaii for several years running the guitar program. He achieved a milestone in Hawaiian music at the 47th Annual Grammy Awards on February 13th, 2005, when a recording featuring Jeff and other island artists, “Slack Key Guitar, Volume 2”, won the first ever Grammy Award for best Hawaiian recording. He is also featured on the recording that won the 2010 Grammy Award in the Hawaiian music category. Five of his songs were featured in the film The Descendants starring George Clooney.