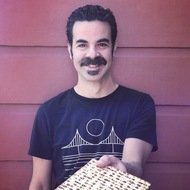 Dan “Lebo” Lebowitz is a six-string slinger and singer known for his unprecedented versatility, deft songcraft, and irresistible charm. Possessing a signature tone, the vehicle for his fluid, buttery sound is a flat top acoustic guitar that he has… (read more)

Dan “Lebo” Lebowitz is a six-string slinger and singer known for his unprecedented versatility, deft songcraft, and irresistible charm. Possessing a signature tone, the vehicle for his fluid, buttery sound is a flat top acoustic guitar that he has personally sliced and diced into an electric flat top, with a vintage style humbucker pickup. Inherently committed to an improvisational approach, Lebo embodies the realm of melodic, soulful rock.

Performing since his early teens in Saratoga, CA, Lebo’s path has been one of constant exploration, both sonically and conceptually. While obtaining a degree in Ethnomusicology at The University of California, Santa Barbara, he co-founded ALO (Animal Liberation Orchestra) with childhood friends Zach Gill and Steve Adams. The band was groomed in their early years by James Brown, and have since recorded nine albums (the last 6 have been released on Jack Johnson’s record label, Brushfire Records/Universal Republic). ALO tours the world, playing prestigious amphitheaters and regularly headlining multi-night runs, at venues such as San Francisco's legendary Fillmore Auditorium.
In addition to ALO, Lebo leads his own band, Lebo & Friends, featuring a rotating cast of musical legends and rising stars. Lebo has become an in demand musical director and featured guest at events around the globe, instantly elevating all lineups he joins. Dan "Lebo" Lebowitz is synonymous with the art of collaboration, and appears simultaneously in more high profile projects than many musicians do in a lifetime.

In recent years, he has been embraced by the Grateful Dead family, memorably collaborating with the surviving members on separate occasions. During a Bay Area concert with Bob Weir, highly respected scribe, Blair Jackson, offered the lofty praise: "I was really impressed by Lebo's guitar work which sounded like a combination of (Jerry) Garcia and George Benson, but was completely original." He regularly performs with Phil Lesh & Friends at Terrapin Crossroads and has also joined Lesh at the legendary Capitol Theater in NY.

When Lebo is not on tour, or adventuring around San Francisco with his wife, daughter, and Siberian Forest Cat, Merlin Moon, he spends his time in his studio Leboland. Equal parts recording studio and sonic exploration laboratory, it is here that he can be found composing, recording, and producing.
No matter what, where, how or who, music is Lebo's equivalent to breathing air or drinking water.