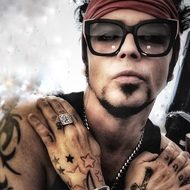 Genre:Alternative/Alt. Rock, Rock, Christian Rock
Lukas Rossi’s musical gift began to emerge as a young musician in Toronto, Ontario, Canada. With his vocal range of seven plus octaves, ability to swing from a deepl baritone to soaring bad boy Mercury type riffs, and a knack for capturing life through lyrics, and commanding stage presence, he has carved a niche for himself in today’s music world. A prolific songwriter, he has a large and varied catalog of songs ranging from heart-wrenching acoustic ballads to heart-pounding heavier rock. His music is published by EMI Music Publishing Canada (2004-present).

Lukas first ventured onto the music scene with two Canadian bands, Cleavage (1995-2005) and Rise Electric (2005-2006), which helped prepare him for what was to come. He entered and won the competition television show Rock Star: Supernova (2006) which earned him front man status with Tommy Lee (Motley Crue), Jason Newsted (Metallica), and Gilby Clark (Guns N' Roses). Their band Rock Star Supernova completed an album and a world tour of the United States, Canada, Australia, and New Zealand.

Following the tour, Lukas returned to Los Angeles and began writing and recording new music. The Love and Lust EP (June 2007) was released and he completed the solo acoustic Love and Lust Tour, making over two dozen stops throughout the United States and Canada. The new material was well-received by fans, and the band Stars Down was born (2008-present). After touring with his new band, Lukas began playing local gigs at such southern California hot spots as The Roxy, The Key Club, The Mint, and Viper Room.

In addition to his vocal talent, Lukas plays multiple instruments, is a songwriter, producer, actor, and vocal instructor.