The Medicine Show
Home Free and on the road! - Country / Blues / beyond 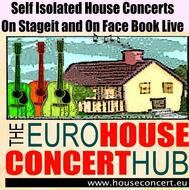 More about The Moose
The Medicine Show Moose Mobiles are two fully equipped TV streaming broadcast studio on a mission to visit house concerts, listening room venues & Roots Music Festivals one in Europe and the other Stateside.

Maverick promoter, presenter, publicist Rob Ellen has been involved in music development for over 30 years he edits Roots Music Pod/broadcast and reviewers/bloggers community Flyinshoes Review, and founded the European House Concert Hub nearly 10 years ago which boasts over 3,000 members worldwide, and helped found Belladrum Festival in The Highlands of Scotland 15 years ago which sells out to 16,000 people each year and is the Highland biggest cultural event. He and his brother Mark present the popular weekly Radio show “Riding Point with The Wayward Ellen Boys” from Sheppey FM Northern Kent Southern England when on the road brother Rob sends back sessions and report to Brother Mark for broadcast.

With help from the army of Radio Listeners, Medicine Show followers and Hub members we managed to crowdfund The Merican Moose Mobile and with the help of Alberta’s Folk Music Doyen Ruth Pures Smith, take her and the Merican Moose on a 60,000-mile road trip visiting and broadcasting from many musical hot spot venues and radio shows and musical cultural locations for the social media audience while introducing Ruth to her American support structure. The trip culminated at the iconic World Head Quarters at Threadgill’s in Austin for The Medicine Show-case day during SXSW

“ To step into The Moose with Rob Ellen is to step into Joy and Adventure. He is, indeed, The Medicine Man. Everywhere we went, he either found or had arranged for, a musical event. For instance, when we wound our way up the mountain roads to Stanley, Colorado to visit the illustrious Stanley Hotel, left to his own devices for a few moments, Rob was to be found in the Ballroom filming & interviewing a young man from Australia performing at the grand piano...or we would randomly pull off the Hwy in the middle of Tennessee at some little distillery that turned out to be a venue and a treasure. From Hank Williams" grave to Muscle Shoals, to Breaux Bridge, to Perkins & Guthrie & Tulsa & Oklahoma City, to Lukenbach, to Sun Studio, to Nashville, Memphis, New Orleans, Longmont & Stanley, Kansas City & Kansas, Lafayette, The Pig Trail of The Ozarks, TEXAS, and TEXAS, to Madison, Minnesota, Rob connected me with people & places that could fill a lifetime of playing music & resisting the agenda. I performed with Legends in Legendary venues. I saw and felt the Beauty that is in America & Her People. So much... I certainly can now book an EPIC stateside tour!! I may just sell everything that I don't need, & go Moosing into The Sunset... 'Life is sudden' is what my father used to say. Now is the BEST time to say YES to Life. Thank you, Medicine Man” ! XOXO RPS

If you would like to have the Moose with all its followers at your event or would like to travel with your Music In The Moose email rob@medicinemusic.co.uk for details.
Promotion services and terms are here
www.medicineshowpromo.co.uk