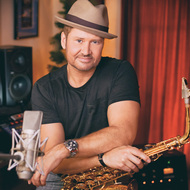 Michael Lington is a Danish-American contemporary saxophonist, songwriter, producer, recording artist and a purveyor of soul and contemporary jazz.

Michael Lington is a Danish-American contemporary saxophonist, songwriter, producer, recording artist and a purveyor of soul and contemporary jazz.

He has released 11 solo albums and has 25 singles that have charted on the Billboard and Radio & Records (R&R) contemporary jazz radio charts.

He has toured regularly his entire career, averaging 60-80 shows per year. In recent years, Lington joined Michael Bolton on tour as his opening act & special guest. Lington and Bolton performed over 350 shows together in more than 40 countries. Venues on the tour included Royal Albert Hall, Sydney Opera House, Universal Amphitheatre, and the Kuwaiti Embassy in Washington, D.C. (where they performed for President Bill Clinton).

In February 2016, Barry Manilow invited Lington to join his "One Last Time" arena tour. Michael opened the show and joined Manilow on the song "Brooklyn Blues" during the headliner's main set.

In September 2019 it was announced that Michael would join the Dave Koz and Friends; Gifts Of The Season Christmas tour alongside Koz, Jonathan Butler, Melissa Manchester and Chris Walker. The 22-date concert tour traveled across the U.S. between November 29 and December 23, 2019.

Lington is signed to the Agency for the Performing Arts (APA) for worldwide representation and has a publishing administration deal with Kobalt Music Publishing. He is an ASCAP songwriter/publisher and a 22-year voting member of the Recording Academy.

Lington was nominated for International Instrumentalist of the Year at the 2009 Canadian Smooth Jazz Awards.

Alone Together (The Duets)