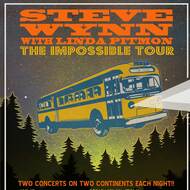 Indie rock icons Steve Wynn and Linda Pitmon have hit the
livestream road on their "Impossible Tour" and will play TWO shows every Sunday in January and February.

Indie rock icons Steve Wynn and Linda Pitmon have hit the
livestream road on their "Impossible Tour" and will play TWO shows every Sunday in January and February.

2020 and the coronavirus pandemic have left many musicians reeling as they try to invent different ways of performing live in an era when touring has halted. Some have turned to drive-in concerts, socially distanced outdoor shows, or livestreams on social media or streaming platforms. Longtime indie rock stalwart Steve Wynn landed in the latter category with a series of highly entertaining, fan-celebrated Facebook livestreams in 2020. But with a new year approaching and a desire to do something different, Wynn has created a cyber tour, set to run in January and February 2021 (see full list of “tour” dates below), that will seek to bring fans, virtually, to some of Wynn’s favorite venues and cities around the world. Dubbed the Impossible Tour, Wynn plans a 7-week-long series of livestreams, playing 13 shows in 13 cities, along with his wife Linda Pitmon (Miracle 3, The Baseball Project, Filthy Friends) on drums. Tickets are on sale here: https://www.stageit.com/Stevewynn.
Lest one think that Wynn and Pitmon actually will be globetrotting, Wynn is quick to explain how this no-travel-involved tour will work. “2020 was the first year that I spent mostly off the road, and I felt it was time to get back out there,” he says. “For the Impossible Tour, I’ll be playing back-to-back shows every Friday – one in Europe and then, a few hours later, one in the U.S. Two shows in one day an ocean apart is possible through the magic of StageIt: we will be broadcasting these shows – without leaving the comfort and safety of New York City – from The Chimp Factory, our rehearsal space in Queens.”
On the surface, this may sound like every other livestream series out there. Think again. Wynn plans to take it to full-on high-concept realm: he and Pitmon will perform the shows as if they are playing in each city and venue on the tour, fortified with stories about the chosen city and venue, along with a cover or two from favorite local bands, and, of course, tales of food and lodging and friends from the many years visiting each town. Props, food, cocktails, and even faux travel from gig to gig will factor into each show and the promotion of it. Fans can join them on tour virtually, from their own living rooms, checking into cities and venues they’d never be able to visit so easily otherwise.
Fans are encouraged to use their imaginations so that they can all pretend, for the duration of each show, that touring is back to business as usual. StageIt allows for interactive commentary among the fans, providing a much-missed communal experience. Wynn also plans to involve the venues themselves, offering incentives for each ticket sold directly from each venue’s website and social media. “The venues will have their own ticket sales link to sell on their end, just like they would for a normal show, and they will be compensated for those sales,” says Wynn. “I was hoping to simulate normalcy until normalcy is normal again, and it’s a way to help out favorite venues who are struggling mightily at the moment, just like artists who make their living from touring are. It is my hope, too, that the venues will also enjoy the fun of putting on, promoting, and hosting a show.”
“I have spent my entire 40-year career playing thousands of shows across the globe, entertaining fans, and making friends along the way,” says Wynn. “Please join our imaginary party, our envisioned time together, our… Impossible Tour!”
Wynn was, of course, an integral part of the new Dream Syndicate album released in April 2020, and he also put forth into the world two Wynn-centric projects this calendar year: an acoustic album in March 2020 and a retrospective box set of solo material in October of 2020. Looking ahead to his next musical birth, Wynn is poised to release a new single on January 1, 2021 in advance of the tour kick-off. The single, entitled “Strummer and Jones,” was recorded in Jamaica several years ago at a little shack recording studio run by the nephew of a legendary reggae singer. “For $80, he put together a backing track, I sang over it – writing the lyrics in no time flat – and this cool record came out of that session,” says Wynn of the reggae-flavored ode to the joy of record hunting and the impact his record collection has had on his music.

Make It Up to You (Unreleased Studio Outtake) - Single