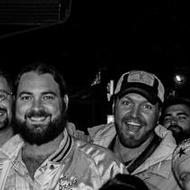 Brasher/Bogue is Kentucky native Andy Brasher and north-western Iowa boy Dustin Bogue.
Both moved to Nashville in 2005. After meeting through a mutual friend in Music City, the two started writing songs. Andy brings to the collaboration a love… (read more)

Brasher/Bogue is Kentucky native Andy Brasher and north-western Iowa boy Dustin Bogue.
Both moved to Nashville in 2005. After meeting through a mutual friend in Music City, the two started writing songs. Andy brings to the collaboration a love for soul music and southern rock and Dustin brings a raw country edge.
Their first album, The Brasher/Bogue Project (released in 2009), was initially meant to be a vehicle for getting their songs to publishers. The fan bases of both Brasher and Bogue joined forces behind the duo and new fans were gravitating toward the music on this CD. The demand to perform live was there. Putting the band together was the next step.
Now joined by John Adkisson on the bass guitar, Chris Sogard on the drums and Jim Heep on pedal steel guitar, Brasher/Bogue hit the road.

In the summer of 2010 Brasher/Bogue landed an event series at the Hard Rock Cafe in Nashville, that became the #1 event series for the venue. Brasher/Bogue performs at "Brasher/Bogue and Real Friends" bi-monthly at the HRC in Nashville and features friends such as Daryle Singletary, Highway 101 (including a guest appearance by Wynonna Judd!), Kelly Pickler, Rivers Rutherford, Bobby Pinson, Ricochet, Veronica Ballestrini, Ashley Gearing, Kingbilly, Jeremy McComb, SixWire and Shawn Mayer to name a few.

In June of 2012, the newest Brasher/Bogue studio album was released. Called By God (Part One), the newest project is a 5 song EP. The first half of a two disc installment. The single from By God (Part One), "Drivin with the Devil" is getting lots of airplay on mid-level markets from California through the midwest into the Ohio Valley and South into Florida. It has been the most requested song for 5 weeks on WBKR 92.5 in Owensboro, KY. #1 on the high 5 at 5 countdown for over 3 months!
Andy and Dustin were commissioned to write "Drivin' with the Devil" by Native-Intelligence Distributions to be the theme for the audio book version of Driving With The Devil: Southern Moonshine, Detroit Wheels, and the birth of NASCAR by Neal Thompson. Racing historians and legends alike are raving about the song's vivid interpretation of the early days of stock car and moonshine.