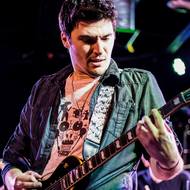 Frank Palangi an indie rock recording artist is freshly homegrown in Upstate New York who pures the fuel on the genre that refuses to die. Whether it's raw acoustic or full driving electric guitar, the presence is a feeding frenzy with gravelly,… (read more)

Frank Palangi an indie rock recording artist is freshly homegrown in Upstate New York who pures the fuel on the genre that refuses to die. Whether it's raw acoustic or full driving electric guitar, the presence is a feeding frenzy with gravelly, deep n gritty, vibrato vocals. Leaving it all on the stage with no looking back, his positive outlook is from his upbringing taught him that one doesn't give up no matter however long it takes. Finding music from the age of 13, he taught himself guitar, bass, drums, recording, mixing with a rounded style that tips the hat on the past 30 year evolution of the 80s & 90s rock & post grunge movement mixed with a taste of heavy metal."I was a shy kid with health issues growing up and music helped shape my mind to think before you leap. I wasn't going for the typical drinking, partying, smashing hotel rooms lol as the rocker lifestyle is believed to be. I could be something different in that element to stand out positivity." -FP

2020 marks a new COVID unknown path in the music industry but ever so determined Palangi is still accomplishing goals as he says "I had no plan in backing down on my dreams", marks his life's mission statement. Seeing the start of Youtube and the rise of social platforms, it changed the field of how to get music out and Frank worked on being on top that game. If things took longer than expected, then it's meant to be he believes, but still with having an admirable stubbornness to his tenacity of not giving up. The big choke in the music business is that you think you'll become an over night success fast, that's not the case. He saw the business side mixed with the passion, relentless work, rejection, and a bit of extra faith.

"Palangi’s positivity extends beyond his music into the way he interacts with his fans. " — Guitar World.

"Frank is an amazing young artist with a very clear and focused direction... Frank knows who he is! A killer singer and guitar player, Frank Palangi is an artist to watch out for!" — Brian Craddock (Daughtry)"

Bring On the Fear - EP

Every Rose Has It's Thorn (Acoustic) - Single

I Am Ready EP