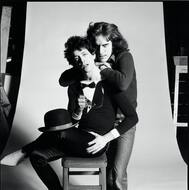 Legendary rock photographer Mick Rock is often referred to as ‘The Man Who Shot the Seventies’, for his iconic images of rock ‘n’ roll icons such as David Bowie, Lou Reed, Queen, Iggy Pop, Blondie, Rocky Horror Picture show and more. Rock was instrumental in creating many of the most famous rock ‘n’ roll images and album covers of all time, including such as album covers for Lou Reed’s Transformer and Coney Island Baby, Iggy Pop’s Raw Power, Joan Jett’s I Love Rock ‘n’ Roll, The Ramones End of the Century, Queen’s Sheer Hear Attack and Queen II, which was recreated for their classic music video Bohemian Rhapsody. He also produced and directed the seminal music videos for Bowie: ‘John, I’m Only Dancing’, ‘Jean Genie’, ‘Space Oddity’, and ‘Life on Mars’.

He has done many books: On Queen, Lou Reed, Rocky Horror, Syd Barrett, Blondie, Iggy Pop, Kabuki Theatre The most recent was for Taschen Books: ‘The Rise of David Bowie 1972 to 1973’, which was done with David Bowie just before he died. The collaboration has been one of Taschen’s best ever selling books. A new version has just been published. He is currently working on his new retrospective book ‘SHOT!’ for the autumn of 2021.

He recently shot a major marketing campaign for Gucci, of which famed Gucci designer, Alessandro Michele, said ‘The campaign is beautiful. I’m so proud of our work together’.
The feature length documentary ‘SHOT! which Vice Films made about his life and career was released by Magnolia Pictures in 2017 and has been for the past two years available on Netflix pay-per-view worldwide

He has had major exhibitions around the world including in cities such as Tokyo, London, Liverpool, Oslo, Amsterdam, Los Angeles, Buenos Aires, Mexico City, Stockholm, Gothenburg, Hong Kong, Kyoto, Sao Paolo, Manchester, London, New Yok City and many more. He had two huge exhibitions the Foto Museo Cuatro Caminos in Mexico City, the biggest photo museum in South America. One on Bowie in 2018 and on Queen in 2019. He is currently planning an exhibition in Brazil for 2021 called ‘Glam!’. And a large retrospective Exhibition at a Museum in Italy for autumn 2021

Currently working on his new retrospective book, to be called SHOT! Scheduled for release Autumn 2021

London born, Rock currently resides in New York, where his has lived for the past 35 years.