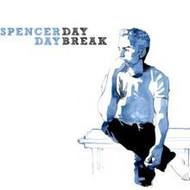 For Spencer, the past year was spent rediscovering who he is both as a person and an artist. “I really have come to believe that my job as an artist is to help people access their emotions. My first job is to help people feel something;… (read more)

For Spencer, the past year was spent rediscovering who he is both as a person and an artist. “I really have come to believe that my job as an artist is to help people access their emotions. My first job is to help people feel something; anything. I want us all to be able to celebrate our shared humanity, regardless of where we come from.”With this revived energy, Spencer spent the winter of 2014 in the studio working on his fifth album Daybreak, set for release on May 6, 2014. The album is filled with a selection of classic tunes from the 60s in addition to five original songs that he wrote in a style to pay homage to them. “The whole album is really a reflection of where I stand at this moment; more happy than I’ve ever been in my adult life.”

Spencer was raised in the small town of Pinetop, Arizona by his mother, an accomplished music teacher and soprano vocalist. Her talent and love of music encouraged and influenced him to become the singer and musician he is today. Spencer found inspiration in the works of Cole Porter, George Gershwin, Roy Orbison, Joni Mitchell, Paul Simon and many others. These artists are the foundation of Spencer’s creative process and continue to influence his writing and performance style.

Over the years, Spencer’s fan base has grown immensely and continues to grow. A clear tipping point was in 2007 when he was asked to perform at the San Francisco Jazz Festival, which led to many requests to headline in a number of music venues including: Yoshi’s in San Francisco and Oakland, the Plush Room, the Great American Music Hall, Monterey Jazz Festival and the Hollywood Bowl in LA. On the east coast, he has earned rave reviews for performances at Town Hall, Joe’s Pub, and the Canal Room in New York City. He has also headlined internationally in England, Japan, Australia and Mexico.

The beginning of 2014 has been jam-packed with international touring, writing and recording new music. He is also looking forward to traveling to Spain to perform at the Mallorca Smooth Jazz Festival and he has Daybreak CD release parties scheduled for Birdland Jazz in NYC, Feinstein’s at the Nikko in SF, Jazz Alley in Seattle and other venues in the US and abroad.

“I create music that is sophisticated but teeming with raw emotion and fire under the surface. It is in life’s contradictions where the most beautiful things are created.”- Spencer Day